Why do we need principles for effective media assistance? 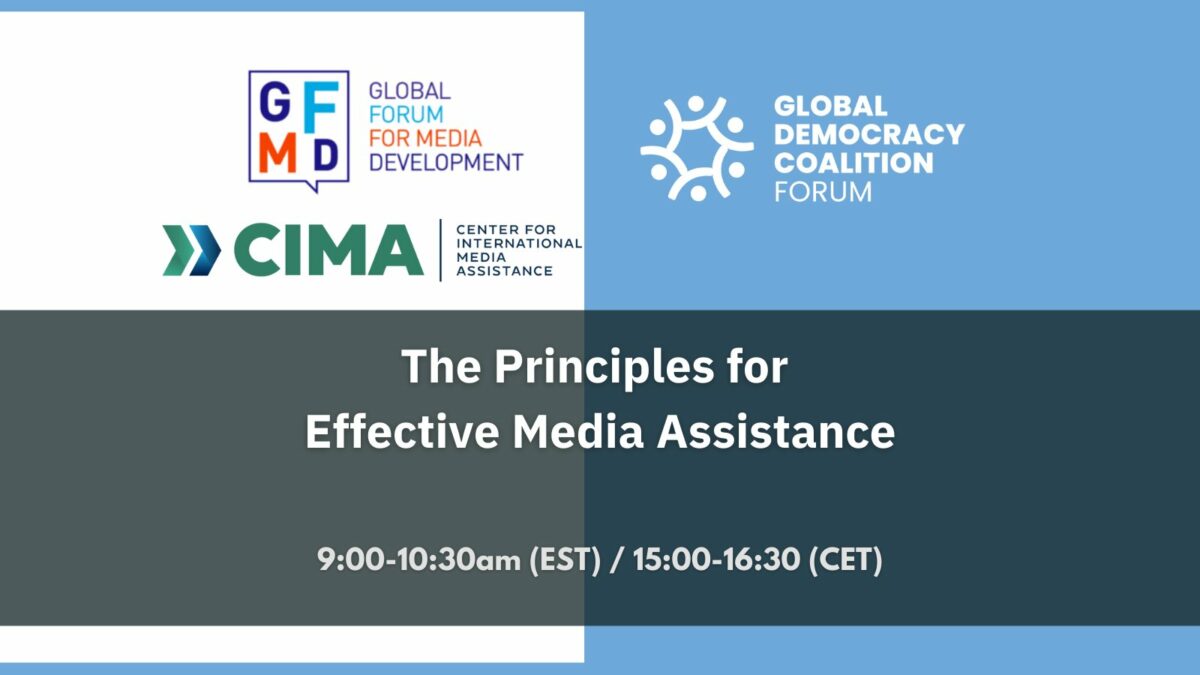 The crisis in independent media now jeopardizes progress in virtually every aspect of human development. A well-functioning independent media system is critical to sustainable social and economic development – a bulwark of peaceful, economically prosperous societies. But the alarmingly fast-growing crisis in the independent media sector made international donors and funders, key implementing agencies, and local civil society organisations ask a question:

At the Summit for Democracy hosted by the Biden administration on 9 and 10 December, the United States and others committed to increasing support for at-risk new outlets, protecting media freedom and freedom of expression as pre-conditions for democracy and human rights. But what are the key principles that need to be in place to guide donors and funders in their implementation of these, and existing commitments, to protecting freedom of media and supporting independent journalism?

Looking for the answers to this question, the Global Forum for Media Development (GFMD) and the Center for International Media Assistance (CIMA) co-hosted a webinar to discuss the need to strengthen and reinforce effective international support to the media sector through a process for updating and codifying guiding principles.

Why is it important to restate the principles for effective support to media development?

Nick Benequista, Senior Director at CIMA, explained that the statement of principles are:

Guilherme Canela De Souza Godoi, Chief of Freedom of Expression and Safety of Journalists Section at UNESCO spoke about how the media development community has an opportunity to build on the momentum from the adoption of the WINDHOEK +30 Declaration on Information as a Public Good, which was adopted unanimously by member states last month.

The original Windhoek declaration laid the foundations for some major achievements in improving the enabling environment for free, independent and pluralistic media. However, as we plan on how to maximise the potential around realising the declaration commitment from member states to recognise and support journalism as a public good, we need to learn from missed opportunities.

“For many years, the media development community was completely disconnected from the internet governance community, and vice versa. And we are paying the bill for this mistake because we haven’t integrated the challenges of the internet correctly in the discussion of media development.” – Guilherme Canela De Souza Godoi, Chief of Freedom of Expression and Safety of Journalists Section at UNESCO.

How could principles be used and adopted by the international supporters of media development?

Justin Williams, Governance Adviser, Freedom of Expression and Media Development at Foreign, Commonwealth and Development Office told the webinar that:

In the run-up to the Media Freedom Conference in Estonia GFMD and CIMA will host a series of consultations with donors, implementers, and national/regional media development organisations to develop a set of general principles. GFMD and CIMA will host a meeting at the conference to discuss the principles and to encourage states to consider making an official request for the OECD DAC’s Secretariat to pursue principles and recommendations for the media sector.

As well as aiming to have these principles recognised and adopted by the OECD, considering the obstacles to effective media development are often political as well as financial, states from the Global South should be engaged in this initiative at an early stage via the UNESCO’s IPDC, the Special rapporteur of Freedom of Expression, Development Banks, and regional bodies.

In brief – What could these principles include?

Recommendations to the Summit for Democracy

The GFMD/CIMA webinar on principles for media development was one of over 40 events held on 7 December as part of the Global Democracy Coalition Forum, a virtual 24-hour event convened to provide recommendations to the Summit for Democracy.

The three recommendations from the GFMD/CIMA webinar on media development were:

1. The Summit for Democracy and year of action that will follow should bolster international commitment to principles for effective support to media development, including protecting media freedom and freedom of expression as pre-conditions for democracy and human rights. Establishing and implementing such principles will be critical to achieving the aims of the Windhoek +30 declaration, Joint Declaration on Challenges to Freedom of Expression in the Next Decade, The International Declaration on Information and Democracy, and the Global Pledge on Media Freedom.

2. The international community should seek to integrate support for independent media into international cooperation for development and good governance, recognizing that Agenda 2030 and democratic progress will depend upon a concerted and collaborative response to the fundamental and structural crisis affecting the media sector.

3. The international community must commit to supporting a vision for media development that upholds core principles of aid effectiveness. This means supporting media development processes that are locally owned, locally driven, and produce long-term and sustainable changes in the political environment for the media.

For more detailed information about the ideas for principles for effective media development, read our summary of key quotes.