Perugia Declaration for Ukraine – 3 May 2022

On World Press Freedom Day May 3, 2022, the International Journalism Festival and members and partners of the Global Forum for Media Development call for increased support of independent media and journalists in Ukraine.

Background information about the declaration. 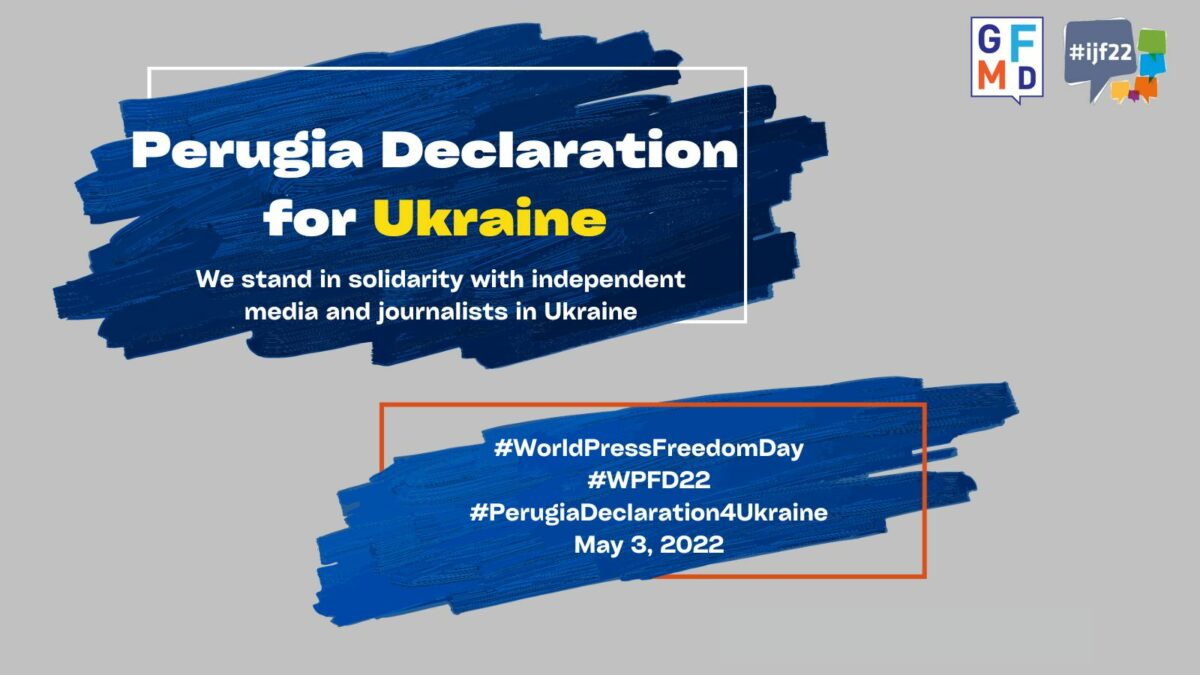 Russia’s invasion of Ukraine has underlined once again the essential role of independent, ethical journalism in assisting citizens to make life-or-death decisions, informing the world, and holding the powerful to account.

As a powerful antidote to the disinformation and propaganda that characterise hybrid warfare, and as a pillar of democracy upon which other freedoms and rights depend, journalism in Ukraine is undergoing a terrible assault.

The targeting [1], torturing [2], and killing [3] of journalists is abhorrent and must be stopped. Those responsible must be held accountable and brought to justice under national and international law. Vicious online attacks against news organisations and individual journalists must also cease. We condemn Russia’s attacks on press freedom and freedom of expression in Ukraine in the strongest possible terms.

The safety and security of all journalists to report freely are essential to ensure that the world understands the reality and facts of the ongoing war, including the humanitarian consequences.

We stand in solidarity with all journalists and independent media covering Russia’s aggression against Ukraine.

The greater the threat to Ukrainian journalists’ lives, livelihoods, and ability to do their jobs, the greater will be our efforts to support them. Funding, protective gear, equipment, housing, training, office space in foreign cities, and psychosocial support – we will do everything we can to support our Ukrainian colleagues’ ability to continue reporting and serving the urgent needs of their audiences.

A window of opportunity for journalism and journalists everywhere

In countries with access to independent sources of news, an often sceptical public [4] are recognising the bravery, commitment and professionalism of journalists and media outlets, both Ukrainian and international. Even governments with hostile dispositions to free, independent media are being forced to acknowledge the vital role journalism plays in ensuring that the world sees the invasion of Ukraine for what it is. Tech companies too are waking up to the fact that not all information is equal, and that there is a moral imperative to give due prominence to professional, independent, public interest journalism.

This nascent, new-found and rekindled recognition of journalism’s value among the public and policy makers is fragile. Ukrainian reporters and international journalists reporting from Ukraine have earned a window of opportunity. The greatest leaps of progress are often made in times of crisis. We, collectively, cannot afford to squander it.

For the sake of the immediate future and safety of our Ukrainian colleagues, and the long term viability of independent, public interest journalism everywhere [5], this is a moment that we all need to rise to.

For the benefit of media and journalists everywhere, we:

To international media and journalists, we ask that you:

To private and public donors and funders of professional journalism, we ask that you

To the EU, EU member states, members of the Media Freedom Coalition and all states that care about the right to freedom of expression and access to information to

To technology, telecoms, internet intermediaries and advertisers, we ask you to

We continue to stand in solidarity with all journalists around the world who work in areas of conflict or where freedom of expression is limited, to deliver trusted information in the public interest.

The Perugia Declaration for Ukraine was launched on 9 April 2022 at the International Journalism Festival. For more information see: https://gfmd.info/ukraine-press-kit/

Add your organisation as a signature to the declaration using this very short sign up form.

More than 150 journalists and other private individuals have also supported this declaration. In order to protect their privacy, their names have not been added to the list.

Add your name to the declaration using this very short sign up form.

Check out Perugia Declaration for Ukraine: