NED – The National Endowment for Democracy (NED) is a private, nonprofit foundation dedicated to the growth and strengthening of democratic institutions around the world.

SDC – The Swiss Agency for Development and Cooperation (SDC) is Switzerland’s international cooperation agency within the Federal Department of Foreign Affairs (FDFA).

FCDO – The Foreign, Commonwealth & Development Office (FCDO) is a department of the Government of the United Kingdom.

Media Freedom Coalition and Campaign – The MFC is a partnership of countries working together proactively to advocate for media freedom, online as well as offline, and the safety of journalists and media workers, and hold to account those who harm journalists and severely restrict them from doing their job.

JFF – is an open community of philanthropic organisations that are supporting media and journalism in Europe. It acts as a hub for overarching collaboration and knowledge management among journalism funders and is changing how philanthropists and journalists engage with one another. Through engaging case studies, unseen research and open discussion, its network and events explore key editorial, ethical, financial and technological questions with world-class experts. JFF aims to build trust and provide a blueprint for future collaboration.

CIMA, IAMCR, Reuters Institute for the Study of Journalism at Oxford University, CMDS at CEU, University of Sheffield, Columbia University

UN, UNESCO, EU & committees of the EP, OSCE (Office of Representative on Freedom of the Media), Council of Europe United Nations Economic and Social Council (ECOSOC)

The Global Network Initiative is a non-governmental organization with the dual goals of preventing Internet censorship by authoritarian governments and protecting the Internet privacy rights of individuals.

Hold the Line Coalition – #HoldTheLine is an international coalition that has come together in support of Maria Ressa. It consists of more than 80 groups led by the Committee to Protect Journalists (CPJ), the International Centre for Journalists (ICFJ) and Reporters Without Borders (RSF).

Defenders in Development Coalition engages in capacity building and collective action to ensure that communities and marginalized groups have the information, resources, protection and power to shape, participate in, or oppose development activities, and to hold development financiers, governments and companies accountable.+ Media Freedom and International Financial Institution (IFI) Coalition,

Design 4 Democracy Coalition serves as a coordination mechanism between groups of democracy and human rights organizations around the world that are working at the forefront of technology and democracy issues.

International Civil Society Organization on the Safety of Journalists Coalition (ICSO SoJ Coalition) is made up of 17 international and regional civil society organizations and aims to strengthen coordination to promote the safety of journalists and fight against impunity.

Media Freedom Coalition Consultative Network is a partnership of countries working together proactively to advocate for media freedom, online as well as offline, and the safety of journalists and media workers, and hold to account those who harm journalists and severely restrict them from doing their job. 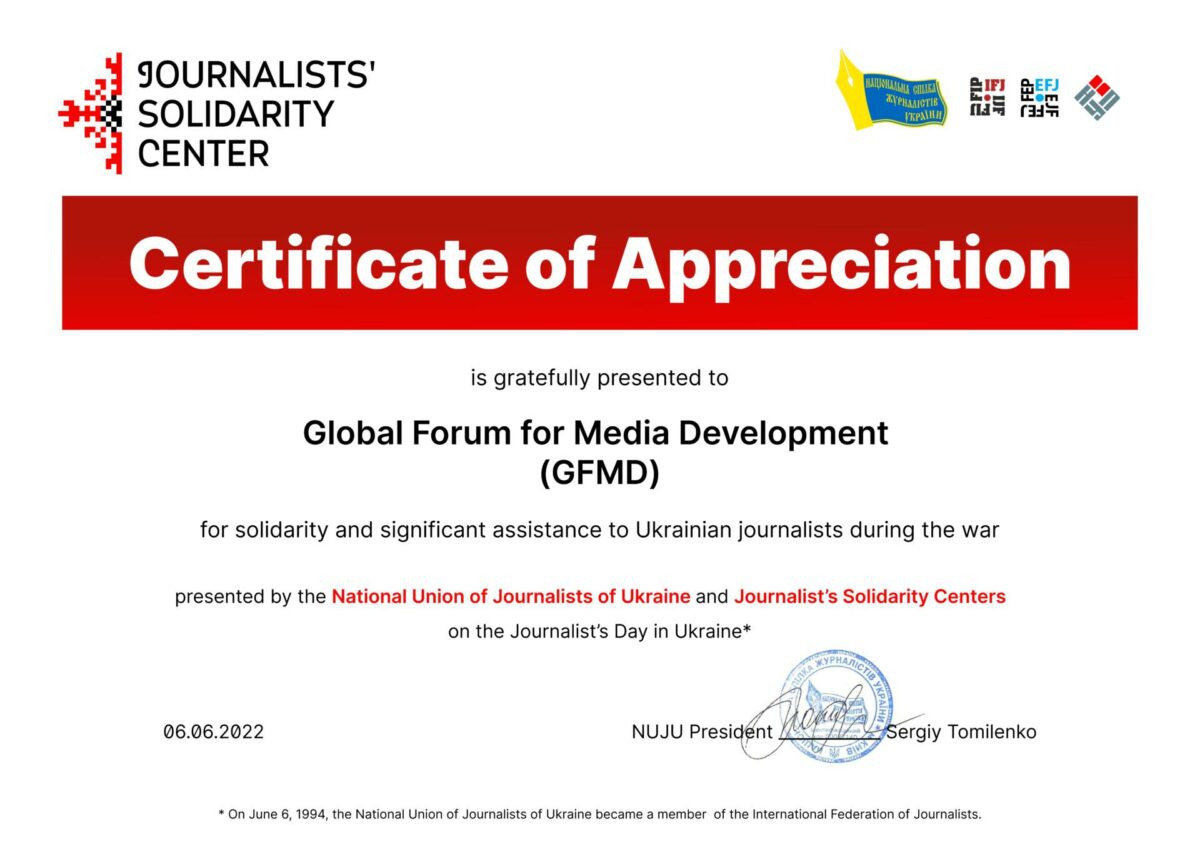