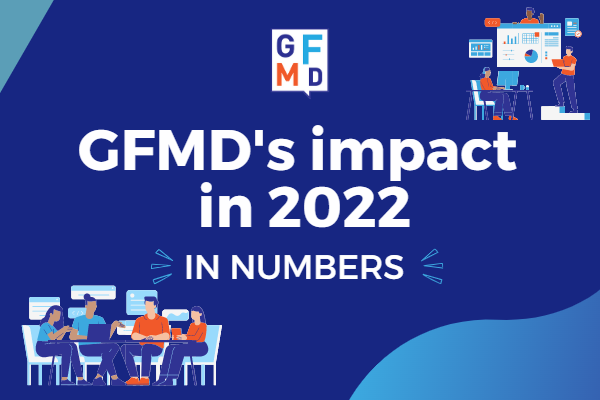 As 2022 draws to a close we want to thank you for your support, engagement, and cooperation through what has been another difficult year for independent media and journalists around the world.

With your support, our growing community has risen to many of those challenges. We know we have plenty more to do and to learn but we enter 2023 with optimism founded on the knowledge that when we work together, we can collectively achieve far more than the sum of our parts.

Reading through GFMD’s highlights of 2022 fills us with hope, energy and renewed purpose for the opportunities that lie ahead.

The following is taken from the GFMD major activities report: April-October 2022 which was presented to the GFMD Steering Committee meeting on 7 November 2022. A full annual report for 2022 will be published in early 2023.

To support media and journalists in Ukraine GFMD has:

“GFMD’s Ukraine media assistance mapping sheet is fantastic and so useful for referencing.” – Senior media adviser at one of the sector’s largest donors.

Together with the International Journalism Festival in Perugia launched the Perugia Declaration for Ukraine, which was signed by over 200 organisations and was the centrepiece for the community’s advocacy efforts around World Press Freedom Day on May 3, 2022, culminating in a session co-organised by GFMD and Unesco on the safety of journalists in Ukraine. 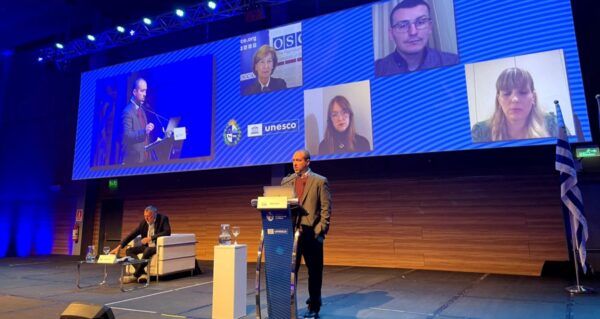 GFMD and Unesco session at the World Press Freedom Conference in Uruguay, which featured speakers from the National Union of Journalists of Ukraine, Kyiv Independent, OSCE, RSF and the IFJ. 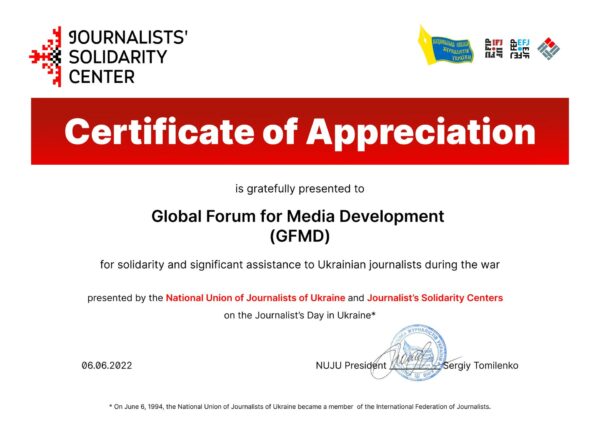 GFMD received a certificate of appreciation from NUJU for solidarity and significant assistance to Ukrainian media and journalists.

What we learnt: GFMD’s team was stretched very thinly, especially over the first four months of the invasion of Ukraine. While GFMD’s focus was rightly on ensuring that implementing organisations were appropriately funded, in hindsight, we should have also looked to secure funding to ensure that we had the increased capacity to deal with the increased workload and the stresses this placed on the other areas of GFMD’s work.

Next steps: GFMD (with support from CIMA) is now distilling the rich consultations into a format that will inform and guide the processes and fora where the initiative has been adopted by and incorporated, including the:

New GFMD report analysing current practices in information-sharing and media-assistance coordination efforts (in Lebanon, Syria, Ukraine and other cases), highlighting common pitfalls as well as best-practice approaches will be published in November 2022 after an extensive consultative review process involving:

Next steps: GFMD IMPACT will internally or in collaboration with external consultants and experts work to summarise literature review, meeting reports, consultations and main takeaways and conclusions from donor-practitioner-academia meetings into informative policy briefs. These documents will be produced for specific target audiences (donors, implementing agencies, practitioners) and will inform various processes (including the above mentioned process of renewing the principles for effective media development).

Digital advocacy: In line with GFMD´s digital policy and advocacy strategy, GFMD has established a constructive working relationship with Meta (Facebook and Instagram) and Twitter to increase the recognition of our members and affiliate members on these key digital platforms as well as to address urgent issues related to safety, account suspensions and content removals. This has been particularly relevant in response to Russia’s invasion of Ukraine with GFMD engaging with both companies to expedite their recognition of relevant actors in Ukraine and the region providing trusted and quality information about the conflict. GFMD is urgently seeking to form similar connections with Google/YouTube, TikTok and other major players.

GFMD’s advocacy coordination efforts on the European Media Freedom Act: Through the EU Media Advocacy Working Group, GFMD created and moderated a sub-group to coordinate advocacy efforts with other organisations, which resulted in a first letter asking for a strong EMFA in May, a joint statement accompanied by a letter to the EU Czech Presidency and a Twitter thread coordinated by Liberties EU earlier in June. After the official launch of the proposal, the group published a joint statement welcoming the proposal and asking for increased transparency and expanding the measures to protect media and journalists’ independence and safety.

Next steps: GFMD will increase its efforts to encourage its members to share their own ideas and strategies for improving MediaDev policy in their respective regions more openly. At the moment, due to limited capacity, GFMD is focusing its policy and advocacy efforts mostly in Europe and within large international organisations (UN, OECD). Our aim is to provide more support to our regional members and their efforts to influence policymakers, regional institutions, etc.  It is critical to hear from our members at the local and regional levels in order to support their initiatives and connect them to our global work. That is the only way to have a genuine impact on policymakers and decision-makers at both the regional and global levels.

The GFMD Fundraising Resource Centre was launched in Spanish and French in April 2022 and will soon be published in Arabic, Russian, and Ukrainian.

In June 2022, 35 representatives of GFMD members participated in Town Hall meetings on fundraising in English, French and Spanish. Responses to the guide and resource centre have been overwhelmingly positive, with both large and small organisations praising the guide and sharing it with partners and colleagues.

“We consult the guide every time we write a proposal. And we use your Funding Opportunities page to search for relevant calls for proposals because it is always up-to-date. Thank you for creating this great resource!” – Ana Brakus, Executive Director, Faktograf, Croatia

“It’s such a fantastic body of work – every guide should be as clear and  actionable.” – Isam Uraiqat, Director, Al Hudood

“I find this guide excellent and very useful. To my knowledge it is the only guide to be so exhaustive, and rich, that explains in such a straightforward but comprehensive way how to elaborate a proposal. Everything is very accessible yet accurate, with all the steps you need to know. One can find an enormous amount of advice, resources, contacts and links.” – Nicolas Boissez, head of communications, Fondation Hirondelle

Bottom Line: Our newsletter dedicated to sharing funding opportunities published on our website as well as funders’ and donors’ profiles, tools and tips from the Fundraising Guide now has nearly 400 subscribers.

Membership engagement: As well as one-to-one meetings and held an orientation meeting for 25 new members and new staff of existing members in June.

“Thanks so much for organising this meeting and telling us about your work. It was really helpful for us to better understand how we can benefit and contribute from GFMD” – Ahmet Alphan Sabancı, Newslabturkey

GFMD was admitted as an official partner of UNESCO (consultative status) in June 2022. This means that GFMD will be invited to send observers to their meetings, participate in their governing bodies (in an observer capacity), be consulted about their strategy and programme; submit written statements on a number of UNESCO programme matters and gain access to financial contributions.

To know more about how to support journalism and media, sign up for a newsletter from GFMD IMPACT – the Global Forum for Media Development’s International Media Policy and Advisory Centre.  Join our growing community!