« Back to all Briefings

How to invest in independent media

In partnership with the International Press Institute (IPI) and Media Impact Funders, GFMD IMPACT organised a roundtable to discuss investing in independent media: its importance to democracy and ways to ensure its long-term financial viability, in light of growing threats to press freedom around the world. The roundtable was organised on the sidelines of the IPI’s 2022 World Congress, which ran from September 8 to 10 at Columbia University. 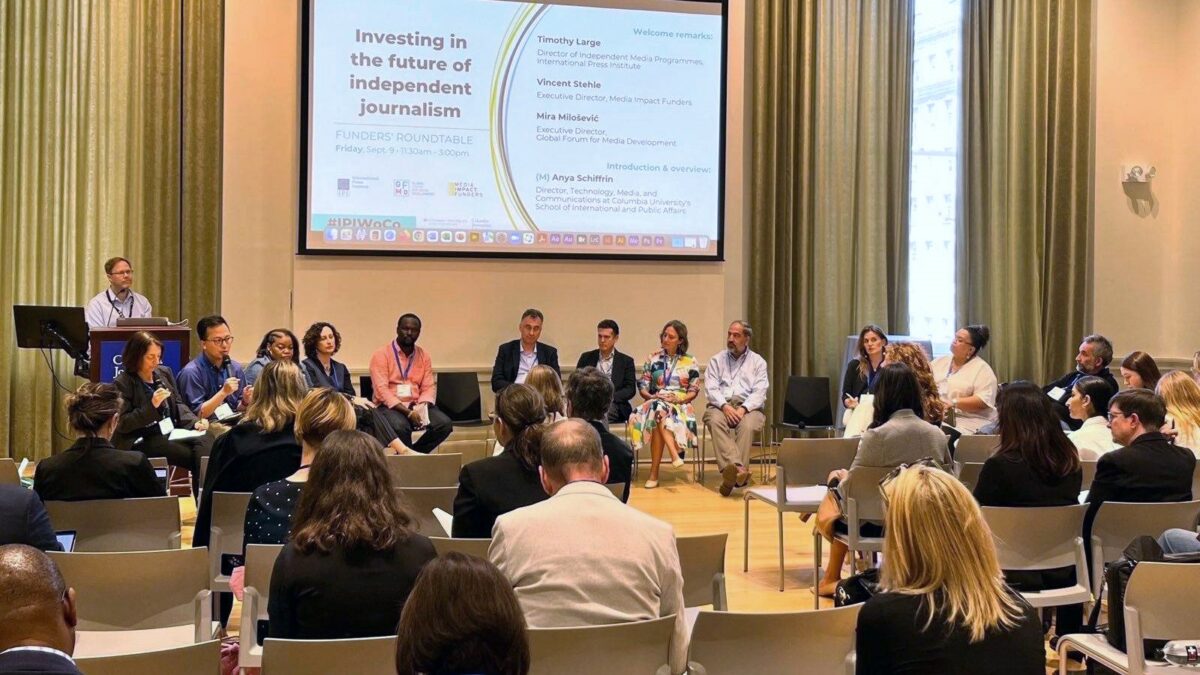 Investing in the future of independent journalism (Sept. 2022) GFMD IMPACT session in collaboration with IPI and Media Impact Funders at IPI World Congress 2022

Why invest in independent media?

For Branko Brkic, editor-in-chief of the Daily Maverik, “supporting quality, independent media is the cheapest investment in democracy”. He called on donors as well as larger, more established media organisations to invest in independent or alternative journalism committed to social transformation.

Sustainable, predictable financing for independent media can allow small organisations in particular, to focus on improving the quality of their journalism, instead of constantly worrying about their bottom line. This, in turn, serves to build and strengthen relations of trust with the wider public in a mutually reinforcing cycle.

How to invest in independent media?

The only way to protect independent editorial policy in any media company, according to Sasa Vucinic, co-founder of North Base Media VC, is to have independent ownership and invest in it. While much of the discussion tended to centre around funding for independent media in the United States, Vučinić added that “the future of independent media is directly proportional to the amount of money that we can raise to make investments in independent media internationally”.

Local journalism is on the frontlines of defending democracy in the United States, said Elizabeth Hansen Shapiro, CEO and co-founder from at the National Trust for Local News. The Trust is investing in local, mostly family-owned media businesses that produce news for local communities.

“Part of what we are trying to do in states around the country is pilot a conservancy model for acquiring small legacy titles, converting them to non-profits where that makes sense, or other mission-aligned structures, and really treating them as the public assets that they are and protecting them from both financial capture, as we’ve seen plenty of in the U.S., and also political capture,” Shapiro said.

Media capture is a real threat to independent media organisations, and it is critical to protect the integrity of their ownership structures so that journalists can do their jobs professionally. In non-democratic contexts or weak or fragile democracies, private investors can intervene to prevent media capture by state-backed cronies, said Harlan Mandel, CEO of the Media Development Investment Fund. MDIF have developed Pluralis, a fund specifically designed to “intervene when a company is under threat of capture by governments and vested interests in Europe.” The aim is to support independent media organisations committed to editorial independence. So far, it has raised $40 million of its $100 million target.

The need to think big was one theme to emerge clearly from the discussion. In the face of disinformation and democratic backsliding in various countries, there is in fact an opportunity for independent media to make a solid case for international donors and private investors.

WHAT DO YOU NEED TO KNOW?

Our Help Desk uses a network of experts and resources brought together by the GFMD IMPACT team to respond in a timely fashion to requests from donors, media development and journalism support practitioners and policymakers.

Email helpdesk-impact@gfmd.info for more information and to submit a request.

Get our monthly briefings on how to supporting journalism and create new media policy by subscribing to GFMD IMPACT’s newsletter, MediaDev Insider.